The Museum and Gallery team was presented with the award Best Exhibition for the popular ‘Hidden Treasures’, which was on display at the Alfred East Art Gallery from February to March 2012. The exhibition received over 2500 visitors from all over the UK and repeat visitors from the local regions. Hidden Treasures brought together a huge selection of the Alfred East’s Permanent Collection to form a rare exhibition in a traditional salon hang. Feedback from the exhibition was exceptional and plans are already in place for a bigger and better display to mark the centenary of the Alfred East Art Gallery and the life of East in 2013.


The second award presented to Kettering was the award for Work with Children and Young People for ‘The Exhibitionists’.  The Exhibitionists was a young curators’ project where local young people aged 13-19 were recruited to take part in a series of creative master-classes, working with museum staff to develop the skills needed to propose, plan and install their very own exhibition.  The participants learned how to curate and create an exhibition from scratch, develop ideas and concepts, design publicity, develop interpretation, prepare and hang work.  After much dedication and hard work from the participants, the resulting exhibition opened in February 2012, bringing in new local audiences and increased museum visitor figures; when compared like for like with this period in 2011. 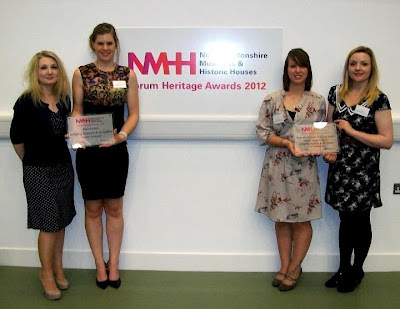 Posted by Kettering Art News at 03:35