Looking back at Local Treasures 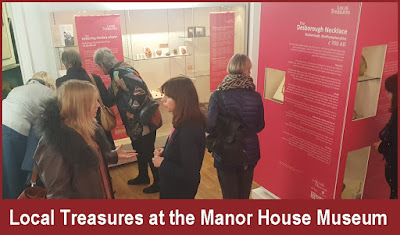 Looking back indeed: Local Treasures featured locally found archaeological pieces, from the most modest to the most spectacular - celebrating over 2,000 years of occupation of Kettering and surrounding areas.

(From a broken sword to the Duddington hoard: local treasures reunited at Kettering Museum)

It was also a landmark in that, in assembling the exhibition, the Kettering team were able to have some genuine treasures brought back to Northamptonshire on special loan (probably - for some of us, at least - the only time it will happen in  our lifetimes) ... the Desborough Mirror and the Desborough Necklace are first rank exhibits usually on show in the British Museum. 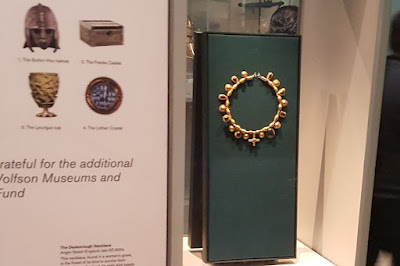 (the Desborough Necklace in its usual display at the British Museum) 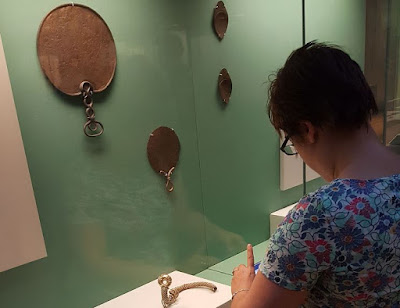 (that beautiful Roman ring, recently dug up in Kettering and now in the Museum collection)

The exhibition was funded by the Weston Loan Programme and Art Fund.  Councillor Scott Edwards, KBC's portfolio holder for Community, Leisure and Youth said it was 'fantastic news to hear that these treasures are coming back to our Borough for the first time and that local people will get a chance to see them.'

'We have been blown away by the ambition and creativity of museums and galleries across the UK and Kettering's idea really stood out.' 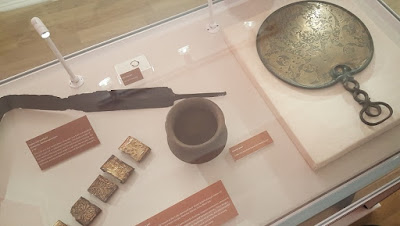 Councillor Paul Marks reviewed the exhibition for the Friends ...

I went to see the Local Treasures exhibition several times - and each time I became aware of different aspects ... there were a great many aspects to try to grasp.  And what is hard to see, must have been far harder to actually make - the standard of craftsmanship is very high, people in the past were certainly not stupid brutes.

The Modern age, from the 20th Century onward, appears to have decided that the previous standards of aesthetics (what is beautiful and what is not) no longer apply - we have lost that common thread of understanding that united previous generations over time. 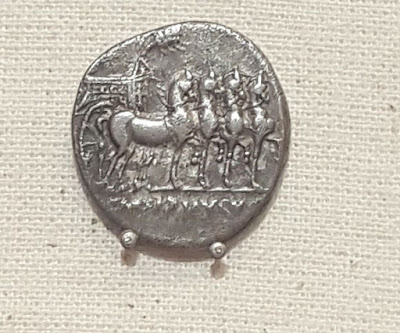 Reflecting the success and quality of the Local Treasures exhibition, Art Fund featured Kettering's Museum Officer as their Curator of the Month.  A deserved accolade for Karen and a pat on the back for the whole team -click on the picture to read more of the feature.

Posted by Kettering Art News at 17:31 No comments: